My husband and I put out hummingbird 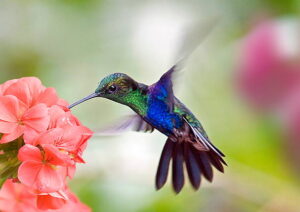 feeders every year, usually around March or April, or when we first see them flying around. We always admire how incredibly fast those little birds can fly and the noise they make as they whiz on past, flapping their wings 10-15 times per second. They are fascinating to watch! This time of year, as summer gently transitions to Fall, the hummingbirds are in a hurry to make final preparations and ‘fuel up’ before their long trip southward.

Hummingbirds will begin to migrate in August (from the northern states) toward Mexico and Central America, when they sense the days beginning to shorten and when their main source of food (insects) begin to lessen as the temperatures drop. During their migration southward, they may stop and feed, and there can be many birds at one feeder, known as the ‘feeding fury 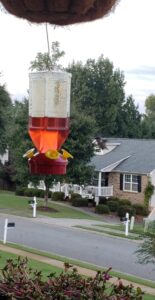 ’. Hanging a few more feeders for these little creatures, so they can drink and store all the energy possible, is helpful.

By the way, red food coloring is not necessary to add to their sugar water. In fact, there are some reports that the red dye is bad for the hummingbird. Regardless, it is not necessary, because they are attracted to the red color of the feeders, not the food. Hummingbird feed is a simple solution of one part sugar to four parts water, which is similar to the composition of the nectar in flowers. Be sure to boil the water before adding the sugar, and then let the mixture cool completely. Store any unused nectar in the refrigerator for up to two weeks.

Did you know that not all hummingbirds migrate? Some of the rarest types of hummingbirds will stay around in the colder months, so leaving a feeder or two hanging and filled for them is not a bad idea and you may get to see some really rare species! In fact, there are nine different species of hummingbirds that typically remain in the state of Georgia during the colder/winter months, including the ruby throated, broad billed, and rufous types.

You may have seen hummingbirds chasing each other and fighting over the bird feeders. These birds are one of the most territorial birds in the bird family and are notorious for fighting amongst themselves and trying to claim food sources. My husband and I shake our heads, wondering why they can’t just get along, because there are usually at least four places to perch on each of our feeders.

In fact, hummingbirds can get quite aggressive when it comes to battle, and begin by watching (because they have excellent eyesight) and then attempting to chase away their enemies, fluffing up their feathers to look larger. If that doesn’t work, they can quickly move on to using their claws and beaks to defend their food and territory. Once they have claimed a desirable territory, they mate with as many females as possible and then keep other males away while the females have and raise their young.

Hummingbirds are quite an interesting breed! We see them year after year; some years we see more of them than others, and we keep their feeders clean and filled each summer (but may now begin to keep at least one hanging and filled in the winter). They are tiny but they are mighty, and are fearless in their quest for survival!