I’m not a fan (at all) of spiders, but the perseverance of this one spider we eventually named Sylvia, is winning my heart over. Now, please know that I keep a safe distance from her (on the other side of a closed glass window) but it is not uncommon for my husband and I to check 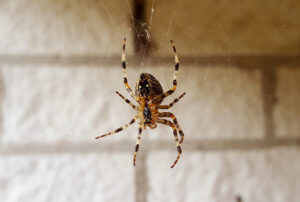 on Sylvia multiple times a day (and even worry about her when it’s windy or stormy). I  have never taken the time to stand and watch a spider at work, especially when building a web or wrapping prey, but it is fascinating and quite remarkable!

Day after day, she is busy either repairing or completely reworking her web, which is parked in a very well chosen spot between a window and gutter of our home, and also near a light source (to attract those tasty bugs).

Did you know it takes only about an hour for a spider to build a new web? They emit a silk-like material that is quite strong, made up mostly of protein. Spiders actually have more than one type of silk that they can emit; one type is used for building the webs, another type is more sticky and used to catch prey, and a third type of silk is a finer grade and used to wrap up their prey. The silk, as it is emitted, is in liquid form but hardens as the air comes in contact with it. The benefit for spiders that spin webs is it makes catching their dinner much easier because they don’t have to chase it. The cost of this, however, is it takes a lot of energy and protein from their body. Sometimes spiders will eat their cobwebs to get some protein back in their system.

Looking at the intricate way spider webs are formed (evenly spaced, carefully patterned) I would think a spider needs quite a bit of rest between construction and repair

work. In fact, because they do not have eyelids, they don’t go completely to sleep but spiders do have periods of ‘downtime’ or time when they expend very little energy. They do not have ears, either, and rely upon vibrations to catch their meals, such as when dinner lands on their web and causes movement.

Only female spiders build webs that catch prey for dinner. The boys build webs to catch prey only when they  are dating the girl spiders and must present their ‘love offerings’ to the females they are interested in. There is a little pressure, too, because if the offering is  not big enough, the female may eat the male spider. If the gift is acceptable and the spiders mate, the female can carry up to 3,000 eggs at a time. That’s a lot of babies to carry!

Did you know female spiders are quite a bit larger than the males, sometimes double or more in size than their counterparts??

Sylvia continues her daily rituals and with the coming colder weather, we wonder where she will go or what she will do. Although spiders like Sylvia are cold blooded and not bothered by the colder weather, they may slow down their activities or even become dormant as the temperatures drop. We’ll continue to watch Sylvia and continue to marvel at her natural gift of spinning symmetric and proportional webs and her patience as she builds and rebuilds, day after day, in the name of survival.